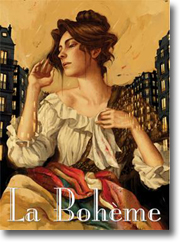 What a fantastic opera! And what a wonderful production delivered by our own Vancouver Opera! "Awesome" was the word I heard as I left the theatre, and indeed, this was a beautiful, well-conducted, well-directed, and exquisitely sung opera. No wonder La Boheme, described as an opera of pathos and humour, has been produced more than 500 times in the past five years, according to Director Nancy Hermiston.

VO's production also impressed me with its evocative sets on a grand-opera scale and the lavish costumes. Kudos to Erhard Rom, Gerald King and Conor Moore! I was also impressed by the fresh young cast who delivered this moving and heartbreaking love story effectively.

I heard myself humming that classic aria popularly known as "Musetta's Waltz" which was sung by "bombshell Musetta", using Musical Director Leslie Dala's phrase. Krsztina Szabo was indeed a bombshell as she sang this classic aria in all her frivolity and sexuality when she makes her entrance in Act II at Cafe Momus. I was also amused by the Vancouver Opera chorus especially the children as they sang and did all the commotion outside of the Cafe. Congratulations, Kinza Tyrrelle and Marisa Gaetanne!

On the other hand, we heard earlier in Act I the humble mistress Mimi (Marianne Fiset) sing another classic aria, Si, mi chiamano Mimi as she sings about herself to her future lover Rodolfo (Jason Slayden) who sings back another classic tune, popularized by Pavarotti, when he went on his "Three Tenor Tours", Che gelida manina and ending with In ravviso il sogno chi,io vorrei sempre sognar. Impressive!

The other "musketeers", friends of Rodolfo, did a fanastic job singing and acting as the all for one and one for all comrade bohemians: Marcello (Etienne Dupuis), Musetta's lover, a painter; Colline (Stephen Hegedus), a philosopher; and Schaunard (Aaron Durand), a musician, and the most successful of the four, always bringing in food and drinks. I enjoyed that comic scene in Act I when the landlord (Thomas Goerz) tries to collect the rent. and they manage to get away without paying.

Although the first acts of this opera are mostly comic and frivolous, the last act is tragic as Mimi dies and Rodolfo sings agonizingly the last notes of the opera before the curtain comes down, "Mimi! Mimi!". An extended standing ovation followed acknowledging Puccini's glorious music, as the singers came out to do their curtain call.