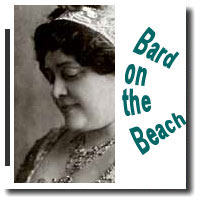 Shorn of its hysterically corny title "A Merrie Evening of Opera," the Bard's excursion into opera -- now "Opera & Arias" -- offers the same enjoyable fare: the young talents of the UBC Opera Ensemble in extracts from the standard repertoire. This season's obvious choice fell on large chunks from Mozart's Don Giovanni, performed in Prague this summer by ensemble members.

The other new element this year was that this was a semi-staged performance with the singers in costume, abetted by the occasional prop, on a stage shared with the orchestra.

Apart from the constant skirting round conductor and musicians -- only one music-stand flopped over -- the concept worked, the singers giving a self-confident performance whose emphasis was placed, as it must in these heady days of "the opera boom," squarely on music theatre.

The cast (alternating with another for two performances each) knew its Mozart all right. The title-character was winningly sung and acted by Michael Nyby, who delivered a polished performance, but his Leporello, Scott Brooks, stole the show with his deft acting and fine singing. David Quigg's Commendatore was at its best in the opening scene, rather than at the close.

Dark male voices mature later than early high ones, and these three young singers show promise, in particular Nyby and Brooks, the latter ready to leap onto to the opera stage tomorrow.

Erin Armstrong's large voice was shone off nicely in her Donna Anna, as she effectively conveyed the role's big emotions, and Stephanie Nakagawa made a near-perfect Zerlina, her sweet voice being prettily projected and placed and her acting adroit. Margo Levae proved a feisty actress as Donna Elvira, giving a tinge of the modern neurotic to this 18th-century-woman.

Less stage-ready were Brian Lee as Don Ottavio and David Norton Locke. The former's diction needs considerable work and his dry nasal voice is not especially pleasing. Locke tried hard, giving his heart to Masetto, but his voice and stagecraft are not to the manor born.

The small-scale orchestra mainly delivered well, although it not surprisingly sounded thinnish in the Overture (which ought to have been cut, too, in the interest of shortening the evening). As usual, Leslie Dala coaxed out a devilishly stylish performance.

UBC's Opera School and School of Music are on a roll, and don't miss Hansel and Gretel in December and Falstaff in February!