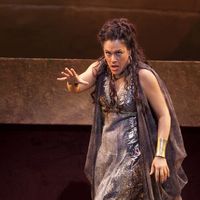 Sung in Italian with English Subtitles

There was a sense of excitement in the air as theatre-goers entered the Queen Elizabeth Theatre on Saturday night to attend Verdi’s opera Aida. Aida is considered Verd's masterpiece, and in the words of Jonathan Darlington, Music Director of the VO,  it is “at the pinnacle of grand opera.”

The red curtain at the Queen Elizabeth Theatre glowed as the Prelude began. This created a hypnotic effect drawing the audience into the music. One could imagine the story of Aida as the music unfolded. This music is so incredibly beautiful that it reaches into one's soul.  The effect of the prelude was so engrossing that one could hear a pin drop as the curtain rose to unveil the set for the first act.

There is an expectation with an opera such as Aida that the sets will be extraordinary. They were big and bold. They were the perfect backdrop to showcase the grandeur of Egypt. The size of the set acted visually to illustrate the world in which the characters in Aida played out their private lives. It is a world where duty is more important than one's individual desires.

It was a privilege to watch the talented cast of this production. They gave authenticity to their roles. They made us really feel love, pain, remorse, shame and greed.  We feel empathy for the triangle of desire that Aida (Mlada Khudoley) , Radames (Arnold Rawls) and Amneris (Daveda Karanas) act out so skilfully.

When Aida pours out her heart because she is torn between the love she feels for Radames and that of her homeland, Ethiopia, she is at one with the orchestra. It was one of the most powerful moments in the evening.

There was a standing ovation at the end of the second act signalling the appreciation the audience was feeling for the talented cast. This production incorporated ballet in two scenes. The dancing was dramatic in its choreography (Chan Hon Goh) and skilfully danced. Ramfis, the High Priest (Morris Robinson), the King of Egypt (Ilya Bannik), the Messenger (John Arsenault) and the High Priestess (Sheila Christie) were excellent in their roles representing the power that governs the world of Aida.

As the final scene plays out, Radames and Aida die in each other's arms and Amneris sobs for her lost love. We realize that we had been transported by the sheer talent of the orchestra, cast and production crew into another world. The audience showed their gratitude with a second standing ovation.

Aida should not be missed.