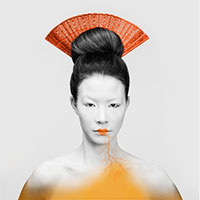 Spectacular is the only word to describe what is revealed as the curtain rises on Turandot at the Queen Elizabeth Theatre. Deep Chinese-red arches set with huge chrysanthemums recede through layers to a disc evoking at once the rich symbolism of China and the opulence of 19th century stage sets. A glowing raked and stepped ring rises in the centre and surrounds yet another playing level sunk into the stage.

The costumes are equally lavish and extravagant from the horned halo of the Emperor Altoum, Son of Heaven (Sam Chung), to the scarlet-clad chorus of citizens filling the stage like something out of The Inferno. So over -the-top are they that the cultural confusion created for Ping (Jonathan Beyer), Pang (Julius Ahn) and Pong (Joseph Hu) - Italian straw hats and silk gowns, martini glasses and snapping fans - is absolutely right. Turandot herself (Amber Wagner), the ice princess, appears first in a frost-white silk robe. When she opens her arms the death masks of the men she has had executed are seen woven into her sleeves from shoulder to floor. The three strangers are dressed more sombrely, Calaf (Marcelo Puente) elegant and bold in black and silver tunic, billowing gown and Tartar fur hat worthy of any adventurous prince in a book of legends, his father, Timur, the deposed king of Tartary (Alain Coulombe) and Liú the slave-girl (Marianne Fiset), in dusty travelling clothes.

All this visual excess is absolutely in the service of the story and creates a fantastic world where the implausible plot of a fairy tale can play out and Puccini's rich and inventive score can be fully realized.

There being no overture to speak of, the character of the Mandarin can establish the character of the entire opera and Peter Monaghan rose to the challenge magnificently, grimly announcing that the princess Turandot will set three riddles to any royal suitor and that death will be the penalty for failure.

All three principals are making their debuts in their roles. It is a pleasure to be able to say that the singing was very fine. Amber Wagner brings an amazing voice of strength and beauty to a challenging role. Director Renaud Doucet has given her opportunities to soften her character and to be drawn to Calaf, but it is the absolute sincerity which she brings to In Questia Reggia, her rationale for her behaviour, that begins to humanise her as she sings of her decision to avenge the rape in war of an earlier princess with contemporary passion.

Marianne Fisets Liú grew from a poignantly self-effacing slave-girl, offering a delicately phrased "Perche un di,... mi hai sorriso" (Once you smiled at me), to an individual of extraordinary courage. "Tu che di gel sei cinta" was delivered with astonishing strength and passion.

Marcelo Puente has dark good looks, an assured presence and a beautiful voice. Excellent pacing ensured he carried off the show-stopping "Nessun Dorma" with vigour and even arrogance. Renaud Doucet made no attempt to underline Calafs kindness, rather the reverse.

Balancing the three principals, Ping, Pong and Pang are all excellent comic actors as well as singers; their trio" Ho una casa nellHonan" was lyrical and bitter-sweet. Alain Coulombe was suitably frail as Timur, the exiled king of Tartary. Sam Chungs Emperor was isolated at the very back of the stage and was difficult to hear, even, unfortunately, when he was further downstage.

Chorus and dancers performed with the panache and flair also shown by the orchestra under Jacques Lacombe. They more than lived up to the splendour of the set and costumes delivering an expressive and impressive performance full of colour, variation, extravagance and delicacy.