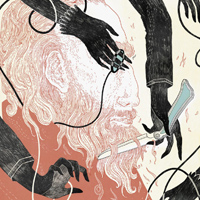 Vancouver Opera
The Barber of Seville composed by Gioachino Rossini, libretto by Cesare Sterbini after the play by Pierre-Augustin Caron de Beaumarchais

A joyous production of Rossinis giddy The Barber of Seville is currently on stage at the Queen Elizabeth Theatre and provides as delightful an antidote to the February blahs as one can get. Ken MacDonalds abstract, fantastical set, all ice-cream parlour pastels and Gaudi-esque towers, sets the scene for an over-the-top theatrical adventure while conductor Nathan Brock carefully contains the exuberant Vancouver Opera Orchestra. The Vancouver Opera Chorus steers just clear of being Gilbert and Sullivans Pirates of Penzance police force as they stumble to be quiet in the opening number and as back-up band to our hero Count Almaviva (Isaiah Bell) they sing with style.

A flamboyant Figaro, (Edward Nelson) with the help of a pair of supernumerary characters straight out of commedia dellarte, stage manages the entire, ridiculous plot which is taken from the first part of Beaumarchais popular but satirical play. An elderly doctor (Thomas Goerz) wishes to marry his young ward Rosina (Julie Boulianne). Knowing that Count Almaviva is attracted to her, he keeps her locked in but with the help of the town barber and jack-of-all-trades, Figaro, Almaviva and Rosina find ways for young love to triumph. Farce reigns. Dr. Bartolo, helped by the scoundrelly Don Basilio (Taehyun Jun), tries to catch Rosina and the Count while Figaro invents one trick after another to outwit him.

Edward Nelson is theatrical in his role and sings accordingly, quick-silver in the famous patter song "Largo al factotum", confidently when his plots are working, comically as things go awry, but always beautifully. Isaiah Bells Almaviva is less flamboyant but no less funny. He combines a graceful person and a graceful voice with a look and phrasing slyly and hilariously subversive. Julie Boulianne plays Rosina as one tough young lady - her flashing coloratura blasts through "Una voce poco fa" like lightning  but she too is an excellent comedian.

Thomas Goerz is priceless as Dr. Bartolo, flapping about the stage with an old mans gait and a querulous bass. The two young singers from the Yolanda M. Faris Young Artists' Program are also excellent. Nicholas Borg is most engaging as Fiorello, Almavivas servant who manages the chorus in the opening scene. Gena van Oosten as Berta the governess has notable stage presence throughout, but nearly steals the show with her knock-out aria of old-maid desperation Che vecchio sospettoso". Rich-voiced Taehyun Jun makes an oily and cleverly comic Don Basilio.

Unobtrusive lighting by Kimberly Purtell supports the production well. The costumes by Dana Osborne match the characters but the wigs by Diane Holme add yet another layer of comedy.

Ashlie Corcoran draws excellent ensemble work from all. The stage direction is as witty as the music and as rambunctious as the plot, over-the top but never out of hand.

One slight niggle: while the sound of the forte piano was superb and Kinza Tyrrels playing absolutely delicious, the bright light from her e-reader was very distracting.