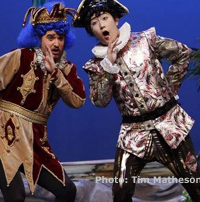 Ariadne auf Naxos is an extraordinary mixture of Viennese charm and commedia dellarte slapstick, 18th century elegance and Romantic lushness, dedication and practicality, and love of all sorts. It shows Strauss at his most kaleidoscopic and offers huge challenges for a student cast. With the lively help of Jonathan Darlington and underpinned securely by the Vancouver Opera Orchestra, UBC Opera Ensemble rose to the challenge, several of them remarkably.

We get three shows for the price of one. The Prologue is a one-act play about a young Composer (Charlotte Beglinger) whose first opera will be performed for a wealthy patron and his guests as a sophisticated finish to dinner. The young man, impassioned and headstrong, is horrified to learn that the same evening will also see an after-dinner entertainment put on by a lowly comic improv. company. His prima donna (Amira McCavitt) too is furious, rampaging out of her dressing room to harangue Zerbinetta (Elizabeth Harris), the harlequinades leading lady. The leading Tenor (Scott Rumble) has his own tantrum over a wig, the comedians think the whole thing is a joke and the Music Master is trying to sooth the suicidal Composer when it is announced that in order to finish the evenings program before the grand finale - Fireworks at 9 oclock precisely - both events are to be held simultaneously on the same stage. Shock and horror are freely expressed, but eventually common sense prevails. The Music Teacher, the comedians Dancing Master and Zerbinetta realize that if the show is to go on, then they must find a way. Beguiled by Zerbinetta the Composer is convinced to make cuts to his beloved Opera. But when he realizes the comedy troupe will be improvising their way through his great tragedy, he despairs again, singing a ravishing aria Musik ist eine heilige Kunst', on the sacredness of music.

Charlotte Beglinger threw herself into the trouser role of Composer with fervent intensity but it was impossible not to be as beguiled as the Composer by Harris captivating Zerbinetta. Jason Klippenstein was excellent as the harried music professor and Spencer Brittens sly Dancing Master was a pleasure. In the non-singing role of the Major-Domo, Kurt Haunsperger's impeccable German, his precision in every gesture and his keen sense of timing was a comic delight. Only the harlequins were a little underperformed.

Part two is a two-fer mash-up, the Opera and Harlequinade rolled into one. The setting is Naxos, a desert island where Ariadne, abandoned by Theseus, longs for death. She is watched by three nymphs, Andrea Wyllie Jillian Clow and Tamar Simon, who soulfully bemoan her fate. The Comedians arrive and hear Ariadne lament her lost love and her longing for death. They watch her hold several poses typical of tragic heroine and try to cheer her up with silly songs and dances to no avail. Ariadne ignores them all. Amira McCavitt has a lovely lyric line and a deliciously understated sense of humour. Eventually the harlequins give up, leaving Zerbinetta to speak woman to woman to Ariadne. In a stunningly virtuoso aria, Zerbinetta tries to persuade Ariadne that what she needs is not death but a new man. As she did in her big aria in the Prologue, Elizabeth Harris made demanding and intricate coloratura appear as natural and easy as speaking. Long as her arias are, she did not falter, each repetition was as varied as her lovers yet full of the magic of love.

Now the Tenor arrives as Bacchus and instantly falls in love with Ariadne. He thinks she is a goddess. She thinks he is first Theseus and then Death whom shes been waiting for. Once these petty misunderstandings have been cleared up, they sing a richly-scored and rapturous duet, breath-takingly written, and sail away into the sunset. Scott Rumble's warm tenor powered through Strauss's phrases, but were delivered in a more godly than passionatemanner. Zerbinetta has her own comment though - a new man, a new god, how can one resist? In a satisfying gesture of reconciliation, director Nancy Hermiston brings the Composer on with Zerbinetta to see Ariadnes apotheosis.