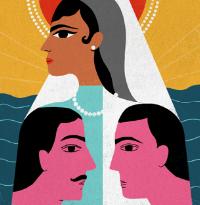 Sung in French with English SURTITLESTM

The Pearl Fishers, sometimes referred to as Georges Bizet’s “other” opera, was written a full decade before Carmen when he was only twenty-five. It’s fair to say that Bizet never visited Ceylon (now Sri Lanka), where the opera is set, and the culture and folklore depicted in this full scale opera comes about entirely from his imagination. It’s a particularity that Vancouver Opera is eager to make a point of in its early disclaimer.

Of course, the audience does not come to see a travelogue; they’re there to experience the joy of Bizet’s musical genius. Kamna Gupta conducts the Vancouver Opera Orchestra in a vibrant reading of the score through a wide range of tempi. The opera boasts two showpiece arias, both duets: the famous friendship duet Au fond du temple saint sung by tenor Aaron Blake and baritone Phillip Addis as Nadir and Zurga put aside old grievances and consolidate their friendship, and soprano Miriam Khalil and Phillip Addis in a heartfelt rendition of Je frémis, je chancelle as Leila pleads for forbearance on behalf of Nadir.

The storyline of two friends being smitten by the same woman is a well worn premise and it usually ends in betrayal (it does this time). While Bizet’s music is full of verve, Eugène Corman and Michel Carré’s libretto appears to lack weight (I subsequently learned that some natural French speakers preferred to follow the English surtitles).

Director Rachel Peake deftly manages a seady pace through all three acts. The performance never feels like two and a half hours long. The rugged sets borrowed from Pacific Opera and Sophie Tang’s exquisite lighting provides superior production quality. The lighting adds a dimension to the second act storm and the third act village fire and differentiates between the night and day scenes. The villages clothing (originally designed for the Santa Fe Opera Company) is simple yet diverse.

Special kudos are deserved for the Vancouver Opera Chorus led by Leslie Dala who perform the roles of the many villagers often on stage together. Bizet’s orchestrations rely heavily on the thirty-two strong member chorus throughout the entire opera. The colourful quartet of female dancers executes Krystal Kiran’s exotic dance syntax with verve. But it is very much in the hands of three central characters that make this production a triumph. The audience was particularly captivated by Miriam Khalil’s flexibility and lyric beauty.

The Pearl Fishers has all the elements of obsession, friendship, betrayal, sacrifice and forgiveness - human strengths and weaknesses that we look for in a good opera.