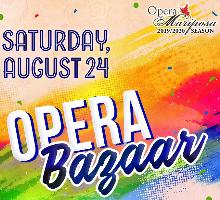 Eight professional artists from the world of opera came together to donate their prodigious talents in a Saturday afternoon fundraising event to help facilitate the cost of Opera Mariposa’s productions for the coming season. They performed sixteen operatic highlights (two each) plus the drinking song chorus Libiamo ne' lieti calici from Verdi’s La Traviata.

Mezzo-soprano Janessa Shae O'Hearn started it all off with a feisty, character driven interpretation of Séguidilla from Bizet’s Carmen. Ms. O'Hearn returned to Sgombra è la sacra selva from Bellini’s Norma where she demonstrated exquisite movement.

Kimani Troy Iba, the only tenor in the company, sang a soulful Una furtiva lagrima, an aria from Donizetti’s The Elixer of Love. Soprano Jacqueline Ko, the current artistic director of Opera Mariposa, delivered an assertive Temerari...come scoglio – one of four Mozart arias performed in the afternoon repertoire.

The most tongue-in-cheek performance came from mezzo-soprano Lauren Solomon in the character of Madame de la Haltière in Massenet's Cendrillon (not to be confused with Nicolas Isouard’s opera of the same name and concept). In Apprenez qu’aujourd’'hui the infamous stepmother can barely contain her excitement.

It’s terrific to see soprano Robin Hahn back performing opera in Vancouver again after a two-year stint working in Europe. Her charming interpretation of In quali eccessi where she takes Don Giovanni to task was a highlight for me personally.

Worthy of a special mention is costume designer Stephanie Ko stunning garments. From the simple frock worn by soprano Michelle Herrewynen singing The trees on the mountains to the opulent gold costume worn by bass Barry Honda as high priest Sarastro from Mozart’s Magic Flute, the quality of the clothing gave an extra dimension to performances.

Before and after the recital, the audience were invited to shop the prop collection and costumes used in previous opera productions.