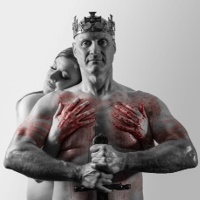 Followers of opera in Vancouver are well served with the production of Verdi’s Macbeth, presented in the intimate setting of the Orpheum Annex. Foregoing elaborate stage and orchestral trappings, this production affords an opportunity to focus on the voices of the company and the clear development of plot using highly effective minimal sets, light and sound effects in the fashion often seen in Shakespearean productions. The result is praiseworthy, indeed.

Jeanine Fynn’s stage direction was effective and imaginative, bringing colourful action to the space. Jacqueline Wax’s stage management kept things tight and on point. However, it was Perri Lo’s musical direction and piano accompaniment that underscored the dramatic emotion presented by the fine cast of singers, brilliantly enriching this classic presentation of hubris.

Andy Greenwood as Macbeth, and Melissa Ratcliff as Lady Macbeth showcased the richness of their voices and talented operatic acting in their performances. Greenwood’s strong baritone majestically proclaimed Macbeth’s passion for greatness, as well as the depth of his conscience in moments of remorse. Ratcliff’s mezzo-soprano power projected the avaricious mendacity and eventual raving madness of Lady Macbeth - strong, focused, and penetrating.

Cameron Killick’s Banquo was also well received by the audience. His rich baritone delivered the likeable character with charm, and his silent approbation as a ghost was very well delivered. Special mention must also go to Kevin Armstrong. The tenor’s portrayal of Macduff enriched the action, not only with effective acting, but with full, round sound in moments of bombast and celebration, as well as in torment. The talents of Libby Donald, Julia Rooney and Moriah Wax as the three witches deserves great credit also, not only for their fine voices, but for their acting, too.

Some of the most enjoyable and endearing moments of the evening were those involving the voices of the entire company. In celebration and joy, and even more in portraying sorrow and misery, the full, rich sounds of the talented voices were, indeed, greatly moving.

This production of Verdi’s Macbeth is a testament to the quality of the internationally acclaimed professional operatic talent that regularly graces the stage in Vancouver’s opera world. This reviewer is disappointed only by the fact that it runs for just two nights. The fine players deserve more exposure, and the Vancouver opera audience deserves to appreciate this fine production longer.