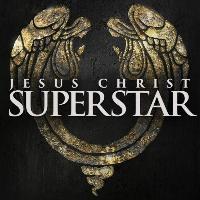 This current incarnation of Tim Rice and Andrew Lloyd Webber’s piece is more oratorio than opera, more rock-concert than either, director Timothy Sheaders nod to its concept-album origins perhaps, with an abstract set and modern-dress costumes by Tom Scutt and hand-held mikes. The hand-sets focus audience attention on the singer or singers, a great help when all the actors are wearing body-mikes and sound is diffused across the stage. Production values are high, especially the dramatic lighting from Lee Curran.

The energetic live band plays behind a scrim, sharing a gallery stretching across the back of the stage with the actors and supplemented from time to time by the actors on-stage with guitars and percussion, Jesus (Jack Hopewell) and Peter (Colin Robertson) amongst them.

Equally affecting was Faith Jones as Mary. Rice and Lloyd Webber follow the medieval conflation of Mary Magdalene and Mary of Bethany into a Mary who is a prostitute. This moves the plot along and the dislike from Judas (Elvie Ellis) and Peter is palpable. Mary is also a comforter of Jesus, very tender, especially illuminating in “I Don’t Know How to Love Him” and most touching in her duet with Peter (Could We Start Again, Please). Elvie Ellis and Jack Hopewell struck sparks off each other, prompting gentle strength from Jesus and fierce resistance from Judas. Ellis was strong from the beginning, overcoming some problems with the sound – the band and chorus were too loud and words were not audible or clear; this improved somewhat during the evening. But his tense suicide scene showed what a good actor he is. Hopewell was somewhat lost in the crowd at first but grew as actor and singer. His loneliness in The Last Supper and despair in Gethsemane were palpable and the trial/torture scene was almost unbearable, partly due to Hopewell’s agonizing acting. “I Only Want to Say” showed his amazing rock music chops.

Other standouts were Caiaphas (Isaac Ryckeghem) and Annas (Kodiak Thompson), leaders of a very campy Sanhedrin; Herod (Erich W. Schleck), even more camp and ostentatious in stunning golden robes, and Nicholas Hambruch as Pilate in a fascinating performance eliciting sympathy and terror equally.

The plot follows the biblical story of Jesus' first working in Galilee, then in Jerusalem for Passover, his capture, trial and death. As was fashionable 50 years ago, Lloyd Webber and Rice show Jesus as a human being sstruggling with a terrible fate. The company plays both Jesus' adherents and the mob howling for his conviction, an apt reminder for our modern times. Some complex music, some gorgeous lyrics and a well-known story have made this a lasting addition to the musicals canon.