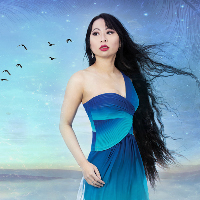 Soprano Jacqueline Ko and her accompanist Karen Shumka came together at St. Helen's Anglican Church on Saturday evening (May 18) to present a recital that offered a selection from classic opera, musical theatre and Disney that raise the spectre of not only Ms. Ko’s personal struggles with Myalgic Encephalomyelitis, but the thousands of sufferers around the world. The Impossible Dream is in honour of International Awareness Day (May 12) for chronic neuro-immune diseases, with all of the proceeds benefitting the ME|FM Society of BC.

Ko kicked off the show with a very personal interpretation of Stephen Schwartz’ poignant “Meadowlark“ about a young woman’s dilemma. The flexible soprano is comfortable with all musical genres, but it would appear that her first love is opera. She indulged the audience with two Giacomo Puccini arias: the first Chi il bel sogno di Doretta (Doretta’s beautiful dream) from La rondine which the singer delivered with clarity and warmth, then in the second set, the showpiece aria Un bel di (one fine day) from Madama Butterfly. It was a rendition full of torment and pathos.

Ko concluded the first set with the show’s title song, also known as “The Quest” from the 1965 Broadway musical Man of La Mancha. The song has become a symbol of sacrifice and attainment of ‘the unreachable.’

Following a short break, Ko and pianist Shumka restarted with “Laurie’s Song” from Aaron Copland’s folk opera The Tender Land. In what I personally considered a highlight of the evening and a departure from the recital format, Ms. Ko explored her skill in coloratura and performance improvisation in an elaborate interpretation of Ophelia’s mad scene from French composer Ambroise Thomas’ Hamlet.

With just a few exceptions the musical program was designed to illustrate the artist’s story of survival, but Jacqueline Ko ended with a couple of songs that evoke hope and positivity. “Watch me soar” about a woman who refuses to be identified by her past and likely the most optimistic of show tunes “Defying Gravity” from Wicked.