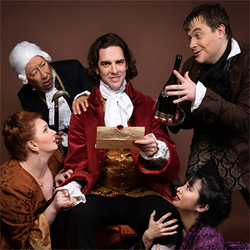 Set in Florence, Italy, Gianni Schicchi is a comic opera in one act by Giacomo Puccini which he composed at around the end of WW!. The libretto is based on a character in Dante Alighieri’s poem Divine Comedy written six centuries earlier. Like most clever comedies, this opera is associated with a very human condition – greed. Its primary focus is relatives fighting over an inheritance irrespective of the deceased own wishes.

Gianni Schicchi is one of the funniest operas one will ever see performed on stage, yet, perhaps paradoxically, it contains one of the most beloved arias, not just in the world of opera, but in the entire world of music. When Lauretta sings O mio babbino caro (Oh, my beloved father) she is pleading with her father Schicchi to allow her to be with Rinuccio the man she loves. In this production soprano Sevan Kochkarian delivers the showpiece aria with as much lyrical simplicity as I have heard from any recording.

Rinuccio, unlike the rest of his family, has some regard for Gianni Schicchi. In his delightful singing of Firenze è come un albero fiorito he extolls the virtues of both Florence and his would be father-in-law. Gianni Schicchi, a common farmer who isn’t much more than a con artist, convinces the Donati family that he has a plan to win back their inheritance for them. The family is naturally willing to listen to and participate in any scheme that will see Buoso Donati’s wealth pass to them instead of some undeserving charity. In Schicchi’s buffo aria Si corre dal notaio (run, get the notary) he ruefully explains his plan.
Despite the role of Schicchi usually played by an older man, baritone Richard Petroski delivers a nuanced droll performance as the title character. Tenor Jonathan Gagné is excellent as the only ‘good guy’ character and Lauren Solomon is hilarious as the vociferous Zita.

An Anglican Church sanctuary is limiting when attempting to create the wealthy Buoso Donati bedroom, although directors Jeanine Fynn and Robi Hahn do manage to squeeze in a four-poster bed – an indispensable prop in any production of Gianni Schicchi. Stephanie Ko’s beautifully detailed period costumes add an element of quality to the production.

The highlight from these excerpts was soprano Robin Hahn and baritone Cameron Killick performing the melodramatic scene from Verdi’s La Traviata when Germont petitions courtesan Violetta to forsake her love for his son.