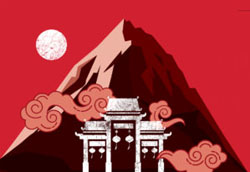 Sung in Ennglish, Cantonese, and Hoisan with English & Cantonese SURTITLESTM

Madeleine Thien (librettist) and Alice Ping Yee Ho (composer) have combined to bring to audiences a truly groundbreaking new opera, the first to be written about any Chinatown in Canada. Performed in English, Cantonese and the Hoisan dialect, Chinatown is a multi-layered concept opera that spans seven decades and crosses two cultures.

Originally conceived as a theatrical stage production, the performance seen at the Vancouver Playhouse is actually a concert format performance in two acts and with a ten piece orchestra led by Maestra Mary Chun, consisting of both Chinese and Western instruments.

Chinatown is essentially a ‘Western opera’ though its narrative explores Chinese themes and sensibilities. Set in Vancouver, British Columbia between the end of the ninetieth century and the nineteen-sixties, Act One centres around the friendship of Saihin (Spencer Britten) and Xon Pon (Matthew Li) both from Hoisan county. Xon Pon came to Canada from China as a boy; While Saihin had to leave his family behind to (hopefully) seek wealth in Canada. The act ends with Xon Pon travelling to Hong Kong to collect the ailing Saihin’s granddaughters, Anna (Emma Parkinson) and Wenli (Vania Chan), who are now orphans, and bring them to Vancouver.

Act Two begins many years after Saihin has died and Xon Pon now acts as Anna and Wenli’s guardian. Anna, the eldest, falls in love with Eugene (Derek Kwan) who is a “paper son” (undocumented immigrant) and the pair leave Chinatown, leaving Wenli and Xon Pon behind.

Director Desdemona Chiang overcomes issues of readjusting from a staged concept with sets and costumes to a more basic concert style and yet maintains a steady pace and manages to sustain the drama. Under the direction of Maestra Mary Chun, the orchestra chose consistent tempi played with clarity and brio throughout.

Last minute replacement, Korean-born Yenny Lee looked georgous in a red floral Cheongsam for the role of the Hoisan singer. Her beautiful voice supplied the story’s narrative, particularly in the first act. Tenor Spencer Britten and bass Matthew Li embodied two immigrants bonding together to overcome their mutual struggles. Soprano Vania Chan as Wenli and mezzo-soprano Emma Parkinson who plays mother Lingling and daughter Anna, acquit themselves well singing in both Cantonese and English. Vania Chan in particular shows an extraordinary talent as a lyric soprano.

During the operatic performance, we hear the name “Gold Mountain.” It was an anonym that was synonymous with this region long after the gold was gone. To the many Chinese immigrants, it signified the promise of prosperity and a better life. The once vibrant Vancouver Chinatown was the second largest in North America, (perhaps it still is) but over the years has suffered from its denizens success who have moved to larger homes in the suburbs.