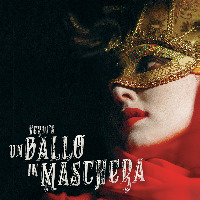 Un Ballo in Maschera (A Masked Ball) is considered by some to be Giuseppe Verdi’s finest opera. Personally, of the almost thirty operas Verdi wrote, I believe Rigoletto and La traviata to be far superior. That said, this shared venture between Opera Mariposa and the newly formed Heroic Opera Company was an excellent opportunity for local opera buffs to see a high calibre production at a fraction of the cost of a full blown professional alternative – even if it was performed in the chancel of a church.

Verdi's Un Ballo in Maschera is set in Sweden before the turn of the nineteenth century. However, because of the opera's controversial narrative, strict censorship at the time forced its creator to offer an alternative setting in 17th century Boston, Massachusetts. Fortunately, this weekend, Vancouver audiences got to see the original.

The opera’s famous love triangle, in which King Gustavo advances his passion for Amelia, wife of Renato, who just happens to be his personal secretary. While Amelia reciprocates Gustavo’s feelings, she is less inclined to consummate the relationship and searches for the magical herb that will rid her of her guilty fervour. This doesn’t stop Renato believing the worst when he discovers the pair together and convinces himself that Amelia should pay for his embarrassment with her life. He soon reconsiders and places the blame on his boss, soliciting the aid of conspirators to assassinate Gustavo – an event predicted by the fortune-teller Ulrica.

The problem with staging such a lavish opera in a church is that Gustavo’s palace, Renato’s house and Ulrica’s lair are seen as the same space. Director Adam Da Ros goes for simplicity; understating the dramatic and orchestrating elements he knows will work. He gets help with Sandra and Stephanie Ko’s costumes. Nothing makeshift here; the carefully detailed garments are evocative of the eighteenth century Sockholm court.

What makes the show an overall success are the performances of the three principals who go to some length to generate lascivious and emotional tension. Tenor Mark Pepe as King Gustavo sings with lyric authority, particularly in his showpiece aria Ma se m'è forza perderti (but if I am forced to lose her). Baritone Andrew Greenwood plays Renato with predicable aloofness. However, He lowers his guard fittingly in his duet with the king’s page Saper vorreste (you want to know). Soprano Sarah Templeton is a force of nature as Amelia. She displays both elegance and vulnerability in her poignant aria Morrò, ma prima in grazia (I will die, but first, a kindness). Soprano Kallie Clayton acquits herself well in the cross-gender role of Oscar, singing with warmth and vitality in Volta la terrea (Turning her eyes from the earth), heroically defending Ulrica.

Verdi's tale of perceived betrayal ends as we all know it must - in tragedy. But as we witness the vengeful secretary’s rage slip away with his king’s life, we see that the consequence of revenge will never be reparation.