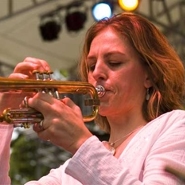 The Girls in the Band

Judy Chaikin’s wonderful documentary The Girls in the Band is about the history of women in American jazz. This was held in association with the Chan Centre’s presentation of Terri Lyne Carrington’s Mosaic Project and Cécile McLorin Salvant.

This excellent film chronicles the contributions and struggles of women in a largely hostile male genre from the early 1920s until today when women are beginning to get the recognition they deserve. The film opens with a group shot of jazz luminaries in Harlem in the late 50s, and highlights the only two women in the picture – the composer, arranger, and pianist Mary Lou Williams, and the equally talented pianist, Marian McPartland – using this to make the point that women have been grossly underrepresented and under-recognized in jazz. It then interweaves this with archival footage and the testimony of numerous surviving and contemporary women musicians discussing their experiences.

What stands out is the system of discrimination against women – men wouldn’t play in the same band with them, they were seen as inferior performers (an accusation blown away by archival and contemporary footage), or if they were grudgingly accepted it was only as singers and piano players. They were not considered suitable to play brass instruments. When they toured with all female bands or with men, they were treated as a novelty and forced to dress up in sexy or frilly costumes, unlike the business-like outfits of their male counterparts.

There were a few exceptions to the prevailing wall of male chauvinism. Dizzy Gillespie used charts by a talented woman arranger (trombonist Melba Liston), and Benny Goodman and Art Blakey allowed women on occasion to play and record in their bands. A breakthrough occurred in the 1970s, when two women musicians, Carol Comer and Diane Gregg, organized the Women’s Jazz Festival in Kansas City in 1978, which soon went from a one-day event to five. It led to contemporary women artists hosting a reunion of the surviving members of the famous women’s band, the International Sweethearts of Rhythm, whose alumni feature prominently in the film.

All in all, this films help close a major gap in the history of American jazz by highlighting the women who deserved far more of the spotlight than they received. Despite having founded the Hot Five and Hot Seven bands and doing much else to launch Louis Armstrong’s career, his wife – Lil Hardin Armstrong – is now but a minor footnote in jazz history. And Mary Lou William became so frustrated at her inability to break through that she retired, found religion, and taught at a music school in Jamaica. Fortunately, she revived her career a few years later. Nowadays, the chances of women building a prominent career in jazz are much stronger because of the hard work performed by these pioneers and we are indebted to Judy Chaikin for telling their story.