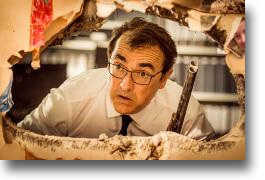 In French with English subtitles

The curious title is an English translation of actor-filmmaker Albert Dupontel’s dark comedy Adieu les cons. It is the intended final statement of disillusioned civil servant Jean-Baptiste Cuchas (portrayed by the director himself) as he bungles his suicide attempt. The action sets off a madcap misadventure involving an unlikely cohort of terminally ill Suze Trappet, blind archivist Serge Blin and the hapless M. Cuchas.

The central story has Virginie Efira as Suze Trappet, a forty-something hairdresser is attempting to weave her way through a bureaucratic maze to locate the son she gave up to the state when only a teenager. While 44 year-old Belgian actress and television presenter Virginie Efira looks healthy and vital onscreen, it soon becomes obvious her character’s health is failing. When she discovers Cuchas unconscious after his clumsy suicide attempt caused panic and chaos through the building, she sees an opportunity to short circuit the system.

The film steers a course somewhere between obtuse farce and clever satire, often bouncing between the two extremes. It hardly matters that some of the verbal humour may not reach its Anglophone audience; the physical comedy is broad enough to keep most filmgoers chuckling. Watch out for a brief cameo by Monty Python alumnus Terry Gilliam.

A pre-festival showing of this film was offered following the VIFF Launch presentation. It could be seen on: Tuesday, October 5 at 6:30pm in the Hollywood Theatre and Sunday, October 10 at 6pm in the Kay Meek Arts Centre