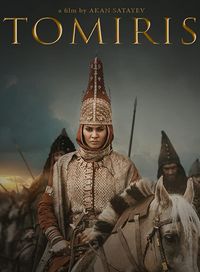 The Legend of Tomiris

This is the first time I´ve seen a film from Kazakhstan and in the Kazakh language (with English subtitles, of course). Excellent film. Superb acting and splendid direction. This legend is based on a true story about an Iranian people from a nomadic confederation of Central Asia.

Tomiris led her armies to defend against an attack by the Persian king, Cyrus the Great,who was defeated and killed 530 BC. Starring Almira Tursyn as Tomiris, this action-packed film despite its length of over two and a half hours, will leave you stuck on your TV from beginning to end.

Although it received mixed reviews, I still consider it an excellent film despite some of the negative comments made about it. I'm pretty sure you'll enjoy this film. It's not only educationa because it's based on historical fact but more so the visuals, especially the long shots of the steppes in Central Asia.

I would nominate it for a Best Film Award.