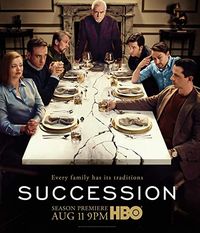 This TV series centers on the Roy family, the dysfunctional owners of Waystar Royco, a global media and hospitality empire, who are fighting for control of the company amid uncertainty about the health of the family's patriarch, Logan Roy (Brian Cox).

This is the second season, and Logan Roy chooses a successor from his family, but then, changes his mind because of disloyalty. He chooses another one, not family this time, but again, she quits. It´s that kind of a game that´s happening, and we're left hanging who the successir will be.

A third season has started this year. Maybe it'll be the same. He chooses a successor and that successor is either fired or quits, and for sure, there'll be another season. More jobs for directors, actors and crew. The last season would probably be his death, and we'll probably still be left hanging on who the successor will be.

The TV series explores themes of greed, power and politics. What else is new? When we're dealing with multi-billionaires, it's the adage "The end justifies the means"--unethical, of course. But that's how you become super-rich, by getting rid of all competition, being ruthless, so you can stay on top. So, in these episodes, Logan´s children vie among themselvews to take over.

I didn't see Season 1. Maybe the first season was much better because it garnered a number of awards. Let's see if Season 3 is much better than Season 2.

Despite the accolades for Season 1, I found Season 2 a bit boring. Too many F...k words, a lot of "uhms", and it looked like a somewhat improvised reality show,