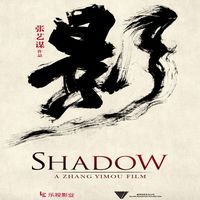 It´s amazing how innovative the Chinese are. In this film, umbrellas are used as weapons. But not ordinary umbrellas, but umbrellas of steel that emit iron daggers as missiles against the enemy. But not only that: the warriors dance like bailainas in a Bolshoi ballet.

This period film was screened at the 75th Venice International Festival and the 2018 TIFF and the 2018 BFI London Film Festival.

This film deals with a case of a somewhat mistaken identity where the "shadow" of brilliant Commander Ziyu (Deng Chao) who plays a double-role here as Jingzhou who was secretly adopted for his resemblance to Ziyu and trained from childhood to be his "shadow".

Yimou's direction pushes the film one step further with wuxia action and the film is created with images not unlike Chinese calligraphy in black and white but also colours especially blood red from dying warriors.

An extremely interesting and brilliant film that got accolades from a number of film critics.