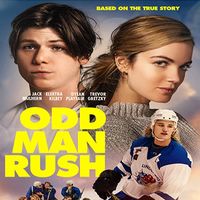 Available September 11 on demand or digital

It´s often said that the book is better than the film. And that´s true with this film which is based on Bill Keenan´s book Odd Man Rush: A Harvard Kid's Hockey Odyssey from Central Park to Somewhere in Sweden—with Stops along the Way, his 2016 memoir  in which he recounts his experiences playing junior hockey, college hockey at Harvard, and professional hockey in Europe. At its publication, the book debuted as the #1 sports book on Amazon.com at which time it also broke into the top 100 books overall on the site.

So it must have been quite good to make a movie out of it. However, the movie fails to keep up with popularity of the book. It´s as though Keenan got the worst parts of the book, and Dearth filmed it. I found it boring. Maybe he should have stuck with the hockey games, rather than go on about his personal life in Europe.

Keenan was born and raised in Manhattan's Upper East Side. So he must belong to the upper middle class being an alumnus of a private high school at St. Bernard's School, graduating from Harvard University in 2009 and an MBA from Columbia Business School in 2016. Upon completion of his MBA, he took a job as an investment banker at Deutsche Bank.

So I presume he wrote the book and did the film as a hobby. Maybe he should stick to writing books or if he wants to get into film, hire a better director.