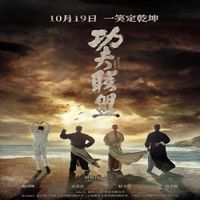 Just as you have the Justice League by DC/Marvel Comics, here´s the Chinese Martial arts equivalent-- a supposedly comedic film about a group of Kung Fu legends banding together to take on the bad guys. The legends include Vincent Zhao reprising his role as ‘Wong Fei Hung’ with Dennis To once again portraying ‘Wing Chun’ master ‘Ip Man’, Danny Kwan (a Bruce Lee look-alike) as ‘Chen Zhen’ and Andy On as master 'Huo Yuan Jia'.

I found the film a bit silly and spoofy. A lot of copying from Marvel characters, especially cyborgs and mutants. In this film, the villain is a high-tech billionaire (Michael Tong) who can transform himself into a cyborg.

Naturally, there's the love interest that belies the film. When his manager prevents Fei Ying Xiong (Shu Ashin) from getting the girl he loves, Bao'er (Mahmet Madina), he summons the help from four legendary Kung Fu masters to learn the highest level of martial arts.