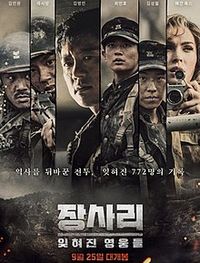 The Battle of Jangsari

The film tells the true story of a group of 772 student soldiers who staged a small diversionary operation at Jangsari beach in Yeongdeok village to draw away North Korean attention from Incheon.

Megan Fox plays a small role as a reporter who is disappointed with the military strategy of the Americans who let this tragic event happen. .

It´s a tragic story because most of these soldiers died during this battle. The film ranges from action to melodrama, but it was excellently done. It was nominated for the 40th Blue Dragon Awards and won Best New Actor and Best Supporting Actor in the 27th Korean Culture and Entertainment Awards

For those who enjoy melodramatic war films, this one is right for you. The thing, though, about watching foreign films is you end up looking more at the subtitles than the film itself.