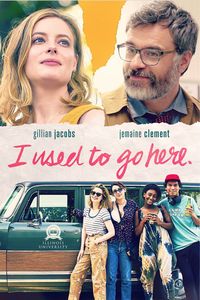 I Used to Go Here

Available August 7 on demand or digital

I´m wondering if this film is a comedy. It seems more like a tragedy to me. Following the lackluster launch of her debut novel, 35-year-old writer Kate Conklin (Gillian Jacobs) receives a welcome invitation from her former professor and old crush (Jemaine Clement) to speak at her alma mater. With her book tour cancelled, and her ego deflated, Kate hopes that returning to her old college as a published author will give her the morale boost she sorely needs. Instead, she falls into a comical regression—from misadventures with eccentric twenty-year olds to feelings of jealousy toward her former professor’s new favorite student.

The only comic thing in this film are the geeky multicultural characters starting with the professor who has a gap in his upper front teeth, and other characters who look Asian, Black and Latino. The white students look funny too: one character is tall and thin and looks like a beanstalk.

The tragedy here is a tragedy of a lot of writers who try to sell their literary works. Even if you get published, that doesn´t mean you´re successful. Just like Conklin in this film, she gets panned by a New York Times writer and that ends her career. Her book tour is cancelled.

My advice to writers is to self-publish, just like indie filmmakers who produce, direct and act in their own films. But don´t get your hopes up. There´s a lot of competition out there even for indie writers and filmmakers.