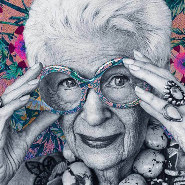 “Nothing I ever did I expected to do,” Iris Apfel, the New York fashionista, explains in Iris, a new documentary by Albert Maysles. “It just kind of happened.” As a nonagenarian, Apfel is a marvellous example of verve, colour (“Color can raise the dead!”) and idiosyncratic style. The documentary illustrates her fast-paced life through a kaleidoscope of brilliant, short scenes.

“You're not pretty and you'll never be pretty, but it doesn't matter. You have something much better. You have style,” Iris was told when she first started out in the fashion industry. She never forgot that and I think she went out of her way to prove her style—becoming a fashion icon and a creative genius.

“Pretty,” explains Iris “fades with age but style never does!”

In 1948, she married Carl Apfel. They opened a textile firm, Old World Weavers and worked on numerous restoration projects including work at the White House for 9 Presidents and their First Ladies. Jackie Kennedy she implied was not easy to please.

Iris also launched a big interior design business of her own and sold antiques through the firm's showrooms around the country. For this, she and her husband travelled extensively, especially to Europe.

The documentary shows Iris haggling for a deal on bangles in Harlem- she only wants cheap ones, three for twenty dollars. She favours churchwomen’s “Sunday best” in Harlem to the uniform, black paraded in Soho. In the film we watch her commuting between New York City and Florida, sometimes taking fifty phone calls a day. She is doing all this at the age of 93 and says she is not going to stop. She loves it too much.

Her style is very eclectic. She collects all sorts of things and puts them together as she sees fit often startling the conservative women with bright colours, layers of big jewelry, bold and stunning clothes. Her shopping sprees include going to flea markets as much as to fancy, expensive shops. She believes in using anything that is original and has pizzazz. She has used church vestments and bright blankets to dress in.

Iris' huge round-framed, signature eyewear inspired a 2005–6 exhibition at the Met.
Yet, Apfel is quite sentimental. She and her husband have been married for over 67 years and one sees the affection and trust between the couple especially as they celebrate Carl's 100th birthday in one scene. “I still have the dress I wore on my first date with Carl, 68 years ago. It still fits, it’s a Norell and I love it dearly,” she says.

She loves her old stuff “like old friends” and has difficulty in parting with the things she has. Two huge warehouses store many of her treasures. She is slowly getting rid of much and says she does not buy stuff now-- except for jewelry.

She has a great sense of humour and a curiosity about all aspects of life. Style she says should reflect one's taste not only of fashion but of nature, sociology and politics which are all sewn together. Much of the craftsmanship of fabric, clothing, jewellery is getting lost, Apfel laments with “this button-pushing culture”.

Albert Maysles, a canonic New York documentarian who died this March, at 88 produced a lively, captivating movie about a “rare bird of fashion” as she is now known. Not only does it teach the viewer much about style but also gives him/her many life lessons through humour and creativity.