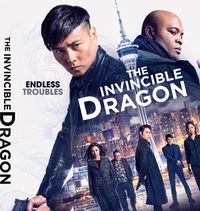 Starring Max Zhang and Anderson Silva, this action-packed film follows the tradition of most Chinese martial arts films where fighting isn't the only feature. There's the fantasy angle, and in this case, an invincible dragon with nine heads.

There's also the crime drama aspect when the hero by the name of Kowloon (Max Zhang) loses his fiancee, a female cop, and he is relentless to find the murderer, an elusive serial killer. The killer has a very distinct MO and only kills female police officers.

There's a lot of talking which I found useless and hard on my eyes as I had to read the English subtitles. I would have wanted to see more action. There's one brilliant action sequence set aboard a derailing train. Juju Chan's and Max Zhang's moves are spectacular.

It's not one of the best Chinese martial arts films I've seen, but it has its entertainment value.