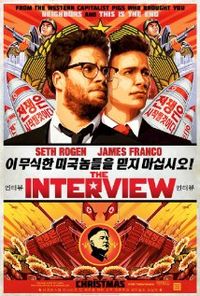 Dave Skylark (James Franco) and producer Aaron Rapoport (Seth Rogen) run the celebrity tabloid show "Skylark Tonight." When they land an interview with a surprise fan, North Korean dictator Kim Jong-un Randall Park), they are recruited by the CIA to turn their trip to Pyongyang into an assassination mission.

This is a hilarious movie at the expense of the Supreme Leader of North Korea because it makes a joke of him, and that's why this film hasn't been shown in Cineplex Odeon for fear of threats from North Korea. I tip my hat off to Rahim, owner of Hollywood 3 Cinemas who is brave enough to screen this film in his suburban theatres at Pitt Meadows and Surrey.

Take advantage of this and go watch it because (who know?) Rahim might eventually get a death threat and his theatres might shut down. Rogen and Franco have been doing zany films. I believe the last one I saw was End of the World which was also a funny and entertaining film. In an interview about The Interview, Rogen said, regarding the global conseuences, ie, threats on Sony, etc."No one has officially told me our movie, 100 percent, has proven to be the cause of any of this stuff. We’re not the first people to shed light on how crazy North Korea is, the myths that exist there and the oddities of the regime."