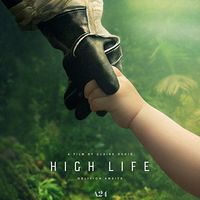 .For those who are into sci-fi, this film about a father and his daughter struggling to survive in deep space where they live in isolation is something to reckon with. French director/writer Claire Denis comes up with an interesting storyline about a group of prisoners serving death sentences and being used as guinea pigs in a deep space mission.

The story begins looking at the life of its main character, Monte (Robert Pattinson who made his mark in the Twilight movies with Kristen Stewart). He's a convict turned astronaut. He's first seen living alone on a deep space vessel taking care of a little girl named Willow (Scarlett Lindsay). . Each prisoner is treated as a guinea pig by Dr. Dibs (Juliette Binoche), who is fixated on creating a child through artificial insemination, but has yet to find success. I remember Binoche in Chocolat (1988) also directed by Denis.

The ending is quite interesting, getting the audience to wander whether indeed the Black Hole, the vessel's destination, is indeed a nemesis. but all in all, I found this sci-fi thriller quite unique. It's Denis's first film in English, as her other films were in French.