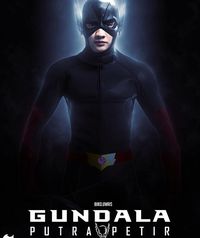 An imitation of the Marvel movies, this film is based on the comics character Gundala created by Harya “Hasmi” Suraminata in 1969, co-produced by Screenplay Films and BumiLangit Studios, and distributed by Legacy Pictures. It is the first installment in the BumiLangit Cinematic Universe (BCU).

The film is set in a Javanese city where corruption and income inequalitydominate people's lives. Sancaka - a gifted young tinkerer - is the son of a impoverished factory worker struggling to make ends meet. Sancaka's father leads other workers in protests against low wages - leading to intense violence between the workers and riot police - but in the final protest, workers bribed by their bosses kill him, and he dies in Sancaka's arms. In a rage, Sancaka inexplicably releases lightning blasts from his body, then falls unconscious.

The plot is quite complex. But basically, Sancaka grows up and as an adult, becomes super-strong whenever lightning hits him and he´s out to get the bad guys: a corrupt legislature controlled by the ruthless, physically deformed crime boss Pengkor, who commands an army of orphans raised as assassins.

As mentioned, this is the first installment because at the end, another character who is posed to fight Gundala appears, in a supernatural fashion, and that´s how the film ends.

Abimana Aryasatya is Sancaka/Gundala, security guard who was struck by lightning, giving him superhuman powers and turning him into the superhero Gundala. Muzakki Ramdhan portrays Young Sancaka.