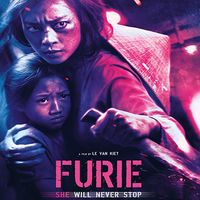 Available on DVD and distributed by Well Go USA Entertainment

This exciting action thriller starsVeronica Ngo as an ex-gangster who is lying low in the countryside after becoming a mother. However, she can't escape her violent past when her daughter is kidnapped, and as she searches for her in Saigon, she comes across the gangsters she was involved with 10 years ago.

I like this film; in general, I like action thrillers especially when the stars are women. It was exhilarating watching the fight scenes between Veronica and her nemesis, the villainess who kidnapped her daughter.

It´s also interesting to see a Vietnamese action film. This is the first time I´ve seen a Vietnamese film. South East Asians (Malaysia, Indonesia, Vietnam and the Philippines) are joining the fold that was once Chinese-dominated And women action stars, to boot.