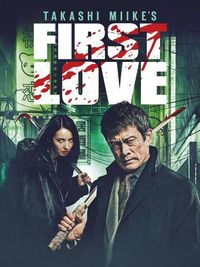 This crime-drama film has a tinge of film noir, slightly satiric of the yakuza, as it tries to show that the traditional yakuza has been replaced by different non-yakuza elements, ie, the Chinese, and the young Japanese who no longer respect the yakuza and act on their own.

And so Miike tries to show this anarchic attitude of the young Japanese gangsters who collude with the Chinese. But the main plot (from the title itself) is the story of a young boxer and a call girl who fall in love ang get innocently entangled with the drug dealers.

It's kind of confusing when two plots are put together. The romantic plot is easy to understand, but the drug dealing that involves a corrupt cop, the yakuza, and the Chinese mafia is quite complicated and hard to follow. At the end, all the gangsters get killed except for a yakuza man who eventually would get caught by hundreds of cops on his tail, as he crosses a long bridge.

Despite its flaws, the film is entertaining, and that's precisely what Well Go USA is after: entertainment.