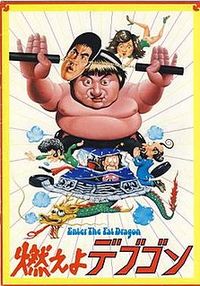 Who says you can´t do Kung Fu if you´re fat? Well, this comedic film proves you wrong.

This Hong Kong martial arts comedy film, a remake of Sammo Hung's 1978 film of the same name,is mostly a parody of the Bruce Lee film Way of the Dragon (1972), and Enter the Dragon (1973).

A fit police officer becomes overweight after being posted to the evidence room and also as a consequence of emotional issues. He is sent to Japan on a mission with a promise of transfer. He fails his mission because of the unsupportive police force. He is forced to be a crimebuster in Japan using his martial arts prowess.