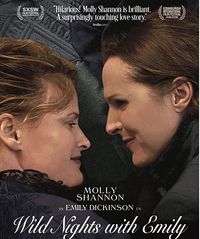 There were two things that struck me about this film: her poetic style and the lighthearted way it was directed.

Emily Dickinson (Molly Shannon) as a Victorian poet was different from the rest of the poets in that era in that she was the precursor to 20th century poets like e.e. cummings who wrote poetry uncapitalized (just like his name)--her unique style of using unneeded punctuation and capital letters in many of her works.

The direction was also different despite the morose ambience she was living through. Her house was next to the town's cemetery and she lived a recluse life.

But the film focused more on her lesbian relationship with her sister-in-law Susan (Susan Ziegler), thus the word "wild" in the title.

The film was well directed and acted, and gives an insight to the relationship she had with her lover since her years as a teen until her death.