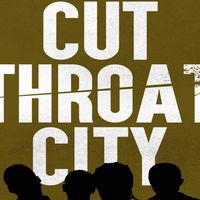 This is an impressive third feature from musician-record producer RZA, about four young Black men in New Orleans who become armed robbers. It´s based from a screenplay by Paul Cuschieri and stars Blink (Shameik Moore), a drug dealer and aspiring comic book artist struggling to make ends meet.

The action takes place in New Orleans a year after Hurricane Katrina, and it portrays that the disaster was bungled up by every level of government, and treated by corporations and real estate companies as a pretext to gentrify the city and drive out as many poor Black people as possible.