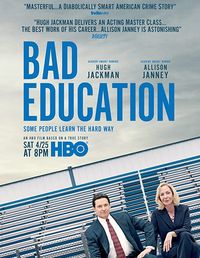 Excellent acting by Hugh Jacknan who´s won a number of awards as an actor. A truly versatile actor from playing Wolverine for a number of films, and now, a completely different role as a homosexual embezzler.

Well, you get caught eventually, and from Wikipedia, we read that they were both jailed for 10 years, but then, received pensions of more than $100,000 a year when they were released. What an irony, eh?