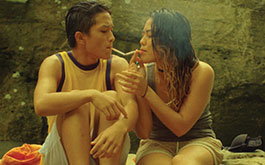 This coming-of-age film presented a beautiful and powerful revelation of the complexities encountered by an intersex teen growing up in the Filipino community. It showcased Adam, a teenager growing up in the Philippines who incurred menstruation in his family home, and the film highlighted the pressures and confusion that arose for him as a young child while he struggled to identify who he was in terms of gender during these early transformative years.

Amidst pressures from his religious father who was a pastor to the highschool bully who discovered he was intersex, Adam struggles to grasp with the challenges faced as a teenager with both female and male body parts. The story reveals his journey from discovery to seeking acceptance for his own body, coupled with friendships built along the way through his mother and highschool friend’s support.

This film’s cinematography was beautiful, showcasing the beautiful landscape of the Philippines as well as revealing Adam’s pain through close-ups of his intersex body and emotions. While some might have found the metaphors of transformation to be quite obvious such as the cocoon turning into a butterfly, I felt it was an obvious yet important symbol for the viewers as Adam goes through the intersex journey of self-discovery.

I would recommend watching this film for those who want to learn more about the intersex community and the struggles and decisions they go through as they learn to recognize what gender(s) they identify with, if any. 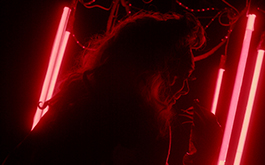 Queer fear meets sci-fi during Apparitions, a series of five succinct reels aka ‘shorts’. The collection of the independent films showcased a variety of different tones and flavours where some were thrillers and others played into science fiction. Overall, it was an enjoyable experience showcasing cultural feels from the producing countries of Canada, Brazil and Sweden.

This short spoke to the unthawing of an elderly Black man’s male partner four decades after he was frozen to preserve his life. With scientific developments in the future, the staff involved in bringing his partner back to life arrive at the elderly man’s home who is accompanied by his daughter. The staff expect to be greeted with excitement as they are taking back the capsule to unthaw his true ‘love’, but much to their dismay, the old man is hesitant to give them access. He develops excuses like not wanting to break down the wall since the capsule is too big to be transported out after his home renovations years ago.

It becomes apparent that the old man is nervous about meeting his former partner after four decades as he has aged and has lived so many years without him. In my opinion, the story highlights the fear of aging along with rejection as it’s assumed that when his partner is dethawed, he will still have remained a younger version of himself.

I quite liked this short. The cinematography was beautiful with the somber lighting and the old man was well acted with his raw emotions painted across his face. I would recommend checking it out!

The tagline of this film is “In the future, love will be frequency.” It was a psychedelic futuristic tale of Sharlene, an androgenous drag queen radio jockey whose show is from midnight to 3 a.m. It showcases her dancing and speaking to a disco ball named Lele about love.

The cinematography was interesting with a retro, Studio 54 dance club type of feel – showcasing bright lights and upbeat music. For me, I found the plot to be too abstract where I wasn’t clear what the takeaway message was at the end. That being said, it could just be me opinion of the flick as it was abstract and could be interpreted differently by others.

This short depicted a Black documentary filmmaker and her camera aide walking through a park where she saw a human sized bunny on the swings and two Black elderly ladies conversing on the bench. It was quite a conceptual plot where she approached the Black ladies and interviewed them around whether they were a couple and the story of their relationship. The short then segued to a different scene where one of the Black elderly woman described to the filmmaker a story she heard about somebody who died in an accident where texting their ex was the cause of the situation.

The cinematography was shot as though you were walking through the park yourself, almost as if you were in the documentary. While the dialogue was interesting, I was confused with the plot and how the two scenes worked together along with how the overall premise related to the title of “Don’t Text Your Ex”. I felt there was a lot going on in 14 minutes where all the aspects of the plot didn’t provide a take-away for the viewer at the end, such as what the purpose of the life sized bunny was.

That is just my opinion and others might be intrigued about the conceptual nature of this flic so do check it out!

This short flic was done in a very modern style and showcased the story of a new writer in a cutthroat ad agency where everyone is expected to come up with fresh new topics to pitch to clients. It tells the story of how the writer interacts with her fellow staff and the alpha boss where fresh, campaign concepts seem to sprout from the food being served.

The cinematography was well done and made you feel as though you were watching a high-budget Netflix movie. The plot was easy to follow and had fright moments to keep you engaged and on edge. The acting was captivating where the Millennial tone was ‘lit’. I’d recommend giving it a shot… only 17 minutes!

While this short was only 12 minutes, they packed in a lot of ‘punch’ and were effective doing it! This told the tale of a young girl who has apparitions of a presence, whether it be spirits or ghosts, while spending the eerily lit evening in a lakeside secluded cabin. With her neighbour checking in on her, they both come to the realization that they are not alone in the woods.

The cinematography was captivating for me as it truly showcased Canadian beauty with the lakes and mountains that we are known for. I thought the acting was well done too as 80% of the film had no dialogue and relied on the lead’s facial expressions to showcase her fright. Definitely worth the watch if you want a few goosebumps to combat the heat outside!