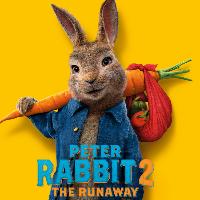 Director and writer Will Gluck's live-action/computer generated animated adventure comedy film is a sequel to 2018's Peter Rabbit. It is, of course, based on the stories of Peter Rabbit created by Beatrix Potter. The film centres around Thomas and Bea McGregor, capably portrayed by Rose Byrne and Domhnall Gleeson, as they start life as a married couple. Despite Peter Rabbit's early misgivings, the couple willingly adopt Peter, Benjamin, Flopsy, Mopsy, and Cottontail as their extended family.

When the rascally Peter experiences an identity crisis, he walks away from the group and goes into town where he comes across Barnabas, a street-wise rabbit (or is he a hare?). Barnabas convinces Peter that his natural skill-set is more attuned to urban crime than country life. The conniving leporid recruits Peter and his siblings as well as some their animal friends with such unlikely names as Mrs. Tiggy-Winkle, Jemima Puddle-Duck, Felix D'eer, and Tommy Brock to pull off a daring heist at the Farmer's Market.

The film also stars David Oyelowo OBE in a live-action role as a slick, though charming publisher Nigel Basil-Jones, who believes that casting Peter as a villain will be more profitable. The role is well below his normal pay grade, but to his credit, he wholly commits. James Corden does voice-over for the title character, who is gleefully obnoxious. A-List actors Elizabeth Debicki, and Margot Robbie provide the voices for Mopsy and Flopsy respectively, but it's Lennie James that really sparkles as the charismatic villian Barnabas.

Will Gluck brings both wit and whimsy to a film intended for a young audience, but may well please adults who will enjoy watching with their children - or grandchildren.