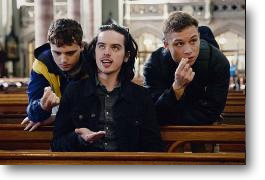 Here Are the Young Men

Here Are the Young Men is a low budget troubled-teens drama adapted from Rob Doyle's novel of the same name. It’s directed by Eoin Macken who also appears onscreen as a mentally unstable homeless man.

The storyline follows three Dublin teenagers during a two month period in the summer of 2003. The former high school friends (if the term is used liberally): Matthew (Dean-Charles Chapman), Kearney (Finn Cole) and Rez (Ferdia Walsh-Peelo) finish school, without necessarily graduating, then set about using their newfound freedom in the most destructive way possible – which includes trashing their former school principal’s car.

At first, they seem to be enjoying life between that time of youthful disillusionment and responsible adulthood. That is until together, they witness a tragic accident when a young girl, whom they had just seen playing on the beach, is killed. The incident has an impact on all three young men, but in totally different ways. Matthew, perhaps the most intelligent, becomes confused and angry. Kearney turns into a sociopath – although he was halfway there before the trauma. Rez turns inward becoming manic depressive.

Eoin Macken’s direction is at times surreal and his story-telling baffling. The cinematic devices he uses hardly work as intended. The grey and gritty outdoor scenes juxtaposed to the neon-like indoor scenes weaken the realism. Even with a running time of just over an hour and a half, the film seems longer than it needs to be.

Dean-Charles Chapman doesn’t quite pull off a “good kid who gets lost” performance, but rather comes across as sullen and self-pitying. Finn Cole shows charisma and energy as the unhinged Kearney and almost single-handedly carries the film. Anya Taylor-Joy looks good, but doesn’t quite seem to completely commit to her role, though she sings a pretty fair interpretation of Joy Division’s “She’s Lost Control.”

Watch for Swedish actress Noomi Rapace, famous for the title role in The Girl with the Dragon Tattoo, in a cameo role.