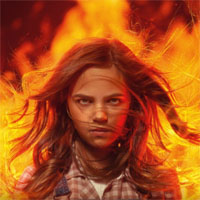 Firestarter is adapted from Stephen King’s 1980 novel of the same name and is a remake of the 1984 film that starred a nine-year-old Drew Barrymore as Charlie. The film, like its predecessor, is pretty faithful to the author’s conspiracy theory storyline about a pre-puberty girl capable of generating fires with her mind. Her parents played by Zac Efron as her telepathic father and Sidney Lemmon as her telekinetic mother have a lot of affection towards each, but are pretty confused about whether their “special” talents are gifts or curses. Charlie’s parents, Andy and Vicky McGee, argue about whether to teach their daughter to perfect her talent, or suppress it.

Once it becomes obvious that young Charlie seems neither willing nor capable of suppressing this amazing gift, the film descends into a conventional chase movie where people with superpowers are on the lam from evil government agencies looking to capture them for sinister reasons. This is where Rainbird, a Native-American assassin comes in. Michael Greyeyes, an Indigenous Canadian, plays the role with remarkable intensity.

Keith Thomas doesn’t allow any empathy for any of the characters in his film – not even Charlie’s loving, but misguided parents. Thomas’ concept is more violent and hi-tech than Mark L. Lester earlier version but it certainly isn’t an improvement. Ryan Kiera Armstrong delivers a solid performance as the stricken protagonist. Watch out for a cameo from veteran actor Kurtwood Smith as malevolent scientist Dr. Joseph Wanless. Kim’s Convenience alumna Tina Jung also gets a small role as Charlie’s school teacher.