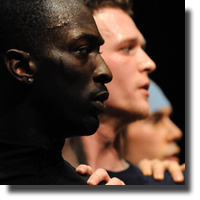 Ballet BC did not disappoint on Thursday, March 8th. The Company gave a stunning performance at the opening of Walking Mad and Other Works. The program features two world premieres and one Canadian premiere. Each piece incorporates intense music, strong dance and stark sets to build a program which engages and holds the audience in its rhythm for the entire evening.

The program began with the world premiere of between disappearing and becoming. This piece was choreographed by Emily Molnar, the artistic director of Ballet BC. It is set to the music of Hildur Gudnadottir which Molnar has described as hauntingly beautiful. The music gives the piece a pace which the dancers respond to with a liquid fluidity that is indeed haunting. Alyson Fretz captured the mood of between disappearing and becoming in a solo dance that blended her movements with the music in perfect hypnotic harmony. The costumes, designed by Kate Burrows, and the lighting, designed by Bonnie Beecher, perfectly accentuated the mood of the piece.

Both Emily Molnar and Aszure Barton are very accomplished Canadian artists whose talent and cooperative spirit of creativity were very much appreciated at the Queen Elizabeth Theatre on Thursday night.

Walking Mad set to Bolero by Ravel was the final selection of the evening. Ballet BC performed the Canadian premiere for this piece which was choreographed by Johan Inger It was first premiered in 2001 by the Nederlands Dans Theatre. It has been staged all over the world since its inception and has become a signature piece for Inger.

It is an audacious offering which incorporates humour, whimsy and obviously a touch of madness. Inger has stated “Its natural course is from something delicate to something powerful.”

The dancers are challenged to keep the pace of the music while delivering the emotion required to convey the meaning of the piece. Ballet BC held the audience in a story that unfolds against the backdrop of a moveable wall and clever costume changes. These gifted artists portrayed many emotions by using their talent for timing and mime.

The philosophy of Socrates may be present in this piece. Inger has stated he was influenced by the philosopher’s saying, “Our greatest blessings come to us by way of madness.” Vancouver, most certainly, is blessed by the hard work and innovative thinking of Ballet BC.

This was a demanding program which blended the elements of classical ballet with those of modern dance. Congratulations to Molnar and the dancers of Ballet BC for an evening that engaged the audience in a very meaningful way.