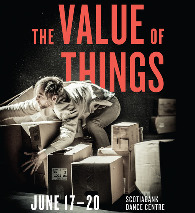 This was a rather unique dance-theatre production with live music. The creator, Jacque Poulin-Denis, attempts to show the connection of Economics and money with ethics, and how these days these two govern our lives. The old adage "money is the root of all evil" is again reflected in this show where consumerism is the culprit.

The stage is covered with boxes piled one after the other and they contain stuff we end up throwing away. Our storage rooms are packed with junk, and it's that constant trash we get rid off but then, we buy more trash, and we are buried in all this, as expressed here when a dancer buries himself inside a pile of boxes.

We are constantly bombarded with flyers with sales, and even if we don't need these items, we buy them just because they're on sale. A dancer expresses this as he has a box full of flyers and pick one flyer after another noting down the items he wants to buy.

The work questions the value of things that make up our daily routine. It converts everything into money, even relationships. In one scene, a letter is read, a Dear John letter, but expressed in business terms. One's persona is "depreciated" and there are no "guaranteed investment returns" on the "dividends" of the personal relationship.

Recordings taken from news clips showing how government despises the arts by doing cutbacks and saying "it's our money". I liked the monologue about the penny which was removed in March 2012 because it costs more (1.06 cents) to produce it.

This one-hour interdisciplinary/hybrid show combining live music by Francis d'Octobre, dance and drama by Jacques and his younger brother Gilles Poulin-Denis, and James Gnam with Claudine Robillard as dramaturgist and and an excellently crafted lighting by Alexandre Pilon-Guay was something unique to watch.