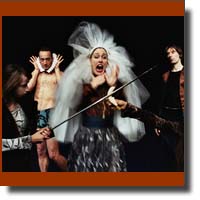 Choreographer Deborah Dunn, a Vancouverite and now living in Montreal, brings her troupe of mostly French Canadian dancers to perform two pieces created by Dunn herself: "Macbeth's Wife" and "Elegant Heathens". These two pieces have been presented in Montreal at different theatres and an excerpt of "Elegant Heathens", a longer piece of around 30 minutes, was presented in New York. This show will be shown again in New York and Quebec, according to Dunn.

Modern versus traditional. This has been the ongoing conflict since Isadora Duncan introduced modern dance, breaking away from the strict rules of classical dancing. In the same way, we encounter this in theatre. There is the established theatre versus the fringe. And sometimes, fringe evolves into being part of the traditional stream of theatre or dance.

Dunn and her company are still in the fringe mode. Whether they will eventally evolve is something we don't know. But from my observation of her choreography and the performance, I believe she's on her way. The first piece in modern dress, "Macbeth's Wife", was a short dance by Dunn evoking soliloquies and dialogues from Shakespeare's tragedy, Macbeth. Instead of using voiceovers of Lady Macbeth's speeches, Dunn recites them herself as she dances. Her approach is comedic; she makes fun of the tragic speeches, and her movements reflect this too.

When asked in an interview by Janet Smith of Georgia Strait about the parodic interpretation of her choreography, which is her signature style, she said, referring to the Macbeth piece: "My piece is burlesque...my attempt was not to achieve a fully serious interpretation." Naturally, many would frown at this, especially those who idolize the Bard, who might say that she should have interpreted it as the Bard intended, a tragedy, and not make fun of it.

But perhaps Dunn has been successful because of her unique way of presenting the traditional. After all, that's what modern dance is all about - finding new ways of interpreting the classics. But on the other hand, as I pointed out, there are the traditionalists who say that desecrating the classics is a big no-no.

With regard to the second piece, "Elegant Heathens", what I believe Dunn tried to accomplish was the concept of what the name of her company is all about, Trial and Eros. However, I saw more trials than Eros, and I think she should put more sensuality and eroticism in this piece. It appeared to me more like Trial and Errors, rather than Trial and Eros. I did enjoy, though, the pirouettes, the pas de deux et trois,the port de bras, and other classic dance moves, even when Vivaldi and the other classic composers were silent momentarily as the dancers did their movements.

But again, going back to the original thesis on her signature burlesque style, where she uses the classics (music and costumes) as a jumping board to her creation, such as playing banana games or simulating the removal of the insides of a cadaver in "Elegant Heathens...well, to some, this is a unique way of portraying the profanity reflected in the too common expression "tabernacle" of the French Canadians.