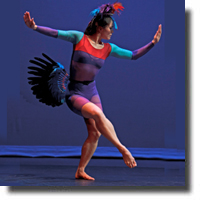 In a city with ample opportunity to see good theatre and artistic performances, it is rare to have occasion to rave about a show. This is one such occasion.

Kaha:wi Dance Theatre’s touring production of TransMigration is a journey into the core of an artist’s Being. This interpretation of the turbulent life of Norval Morrisseau explores how his shamanistic spirit influenced his artistic inspiration in his struggle to overcome the distractions and destructive forces of his all-too-human nature. This production is rich with colour, sound, music, and, above all, dance which engages the audience, and immerses us into a mystical realm of impression and emotional compulsion.

The credits above show the driving force behind this production. Santee Smith has garnered numerous nominations and awards for her creative genius. Her determined energy in exploring the portrayal of human and spiritual identity is highlighted in TransMigration, and her influence in so many aspects of this production is a testament to her commitment and inspired talent. The production elements of this presentation - the video and lighting, sound and music, costumes, art pieces and simple props - are outstanding and compelling, producing an extravaganza of light, music, and colour as a backdrop for the inspired interpretive movement that blends traditional indigenous and modern dance into a wondrous exploration of identity and its expression.

The performers are the visions, inspirations, demons and doubts of The Artist, masterfully portrayed by Billy Merasty, an accomplished veteran of the performing arts. Each dancer plays many roles in this production, from ordinary people to serpents to sacred animals and spirits. All the dancers, Santee Smith, Michael Demski, Nimkii Osawamick, Brent Atkinson, Emily Law and Ceinwen Gobert, bring a wealth of recognized experience and talent to this production. They carry us into the artist’s prayerful visions, allowing us to share in the ecstasy of creation. They embody the triggers of, and struggles with addiction that frustrate the artist’s creativity, creating a base and vulgar version of self-identity that culminates in despair and futility in the illusory freedom of intoxication. They become the emergent return to authentic self, the fullness of integration of all elements of the artist’s identity - the visionary spectator, and the material interpreter as artist - all One with Creation.

TransMigration is more than powerful. It is spellbinding, sensuous and always compelling. This is a show that reaches the spirit of each of us, and teaches us what we are able to learn.