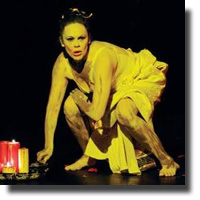 The Shadbolt Centre for the Arts
Camino Al Tepeyac

Vancouver’s Salomé Nieto's performance on opening night was riveting. Cheers and a standing ovation immediately followed after her 50-minute performance which portrayed the mythical exploration, scope and depth of her Mexican culture.

Nieto uses religious iconography, beliefs and traditions as inspiration for this work. The opening scene has her in a mask, as she approaches audience members and gives to some (I was one of the lucky ones she chose) some sort of a token, a bracelet/necklace of indigenous origin.

The next scene has an altar coming down from above with candles, and with a rosary, she mumbles prayers, Hail Marys in Spanish, as she lights the candles. We see here a metaphor for the convergence of two cultural and religious beliefs in one female deitywhich the Aztecs called Tonancin (Our Mother Coatlicue) and after the conquest her name became Virgin of Guadalupe and the Mother of the Mexican people in the Catholic faith.

The Theatre in the Round gave intimacy and an enchanting theatrical experience to her performance, and in the last scene, we see the pre-historic goddess who bares herself naked and goes through pagan rituals of blood and clay. Her journey of transformation was made more prominent with the sounds and visuals created by Mark Eugster, Candelario Andrade, and Robert James Mitchell.

This was indeed a unique and innovative performance by this dancer, who comments, "I am excited and honored to present my first full length solo “Camino al Tepeyac.” A coproduction between pataSola Dance Company and the Shadbolt Centre for the Arts."