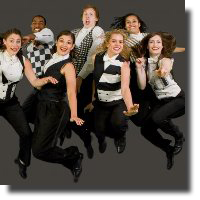 Souls of Our Feet (a play on words with "sole") directed and mostly choreographed by Tapestry Dance Company (Austin, Texas) founder and tap dancer Acia Gray wowed the Vancouver audience with their tippy-tapping, shimmy-shamming and improvisations during opening night of the yearly VITF. This professional group of seven tap dancers with three Canadians in the troupe (Travis Knights, Tanya Rivard and Matt Shields) impressed the opening night crowd with their performance.

The first part of the show was a celebration of early American Tap Dance from the first half of the 20th century. Film clips from movies like "The Shim Sham Shimmy" (1937), "All American" (1947), "In the Navy" (1941), "Singin' in the Rain" (1952) and others were first projected on a screen in the backdrop, and then the dancers would come out with period costumes duplicating the style of that era and do their tap dancing almost exactly as Gene Kelly, Fred Astaire, Bill Robinson, the Miller brothers and those Afro-American pioneers of dance did it.

I particularly liked the dance number "The Women" where Katelyn Harris danced like Eleanor Powell in "Ship Ahoy" (1942), Siobhan Cook paying her dance tribute to Jeni LeGon in "Alibaba Goes to Town" (1937), Jacqueline Coleman a spitting image of Ginger Rogers as she danced almost exactly like this icon movie star in one of her routines in the film "Barkleys of Broadway" (1949), and Tanya Rivard with her sexy legs depicting Ann Miller from Fred Astaire's choreography of "Easter Parade" (1948).

This was an amazing two hour tap dance show, and most of these performers will be conducting workshops throughout the festival which ends September 2. Check out the Festival's website for more info.