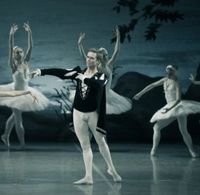 The Mikhailovsky Ballet and Orchestra from St. Petersburg (Russia) which was first founded in 1833 on the initiative of Grand Duke Michael, brother of Nicholas I, brought a classic version of Swan Lake to Vancouver. It was a unique Russian version of the four-act ballet that was first seen in 1956 when the former U.S.S.R. allowed the Bolshoi Ballet from Moscow to make its first tour of the West.

The production was indeed extravagant, with a full orchestra of 66 musicians and a cast and crew of 180, including 90 dancers. No wonder in the curtain call, not all the dancers did their bows because they all probably couldn't fit in the QET stage!

But this was a magnificent production. I was impressed by the set and costume design of Simon Virsaladze. Never before have I seen a production so lavish as this, as the Russians, during the cold war, had the best ballet dancers and athletes.

In the last performance, as well as the previous evening performances, the graceful and talented Oksana Bondareva played the role of Odette/ Odile, while Prince Siegried was performed by Leonid Sarafanov. In the earlier matinee performance, Irina Koshelva played the Swan Princess and Victor Lebedev danced the prince's role. These dancers hail from the Mariinsky Theatre, the other and much better known company in St. Petersburg, known by its Soviet-era name the Kirov Ballet.

The audience was truly awed by these Russian dancers, especially the graceful rendering of Bondareva and the athleticism of Sarafanov. I could hear the ooohs and aaahs as Bondareva held still for at least five seconds standing only on one leg, arms and the other leg high in the air.

This was indeed a treat for Vancouver audiences, especially in their last performance, with a prolonged standing ovation during curtain call. It's quite rare to have Russian ballet companies come this way, especially to Vancouver, for a premiere North American performance!

It's a pity, though, that there wasn't enough publicity generated, and there were around 40% of empty seats in the last performance, despite tickets selling at half-price. But hopefully, this fabulous company returns to Vancouver and if it does, I'm almost sure Vancouverites will be scrambling for tickets.