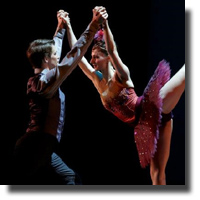 What a captivating version of Svengali! Kudos to the RWB for presenting this gothic, dark and mysterious tale. The dance inventiveness of this piece is to be applauded!

Part of the success of RWB is due to the creative and searching mind of the capable and inspiring Artistic Director Andre Lewis who leads RWB..The inspiration for the Svengali story was taken from Germany between the first and second world wars. Svengali is a young, mystic-like figure who is obsessed with mind control and hypnosis. His attempts to control women are a strong feature of the story and perhaps a fitting global metaphor for the exploitive conditions facing millions of women in the world today.

The role of Svengali was played with distinction by Harrison James who comes from New Zealand and joined RWB in 2010. James is a technically sound dancer who also has the capacity to express the requisite emotion of a dark and sinister character.The lead female role of Trilby was played with precision by Albertan Amanda Green who joined RWB in 2004. Green has the emotional range to convey the vulnerability and fragility of her character. She is a dancer who is able to show both strength and beauty, a fine balancing act that only truly fine ballet dancers possess.

Vancouver favorite Sophia Lee played the role of Svengali’s First. Lee joined RWB in 2011 and is an elegant dancer with a charming allure. To convey a powerful, dark story such as Svengali it is important to have the right images and mood. The staging could have been more edgy and dark to better convey the sinister tones of this story. Light and staging have a powerful impact upon the emotional resonance of a performance.

Svengali was choreographed by Mark Godden who has created several original works for Boston Ballet, American Ballet Theatre, Ballet Contemporania of Argentina and other distinguished companies. He is a recipient of the coveted Choo-San Goh Award.

The evening concluded with appreciative applause from the capacity crowd. Overall, the performance was very good but not a ‘home run’.  "Eight out of ten" is how two audience members described it. Nonetheless, RWB demonstrated with excellent talent that they could successfully challenge ballet audiences with dark and unconventional themes.