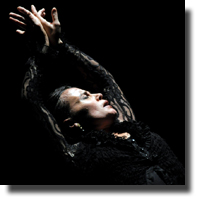 A standing ovation greeted Soledad Barrio and her troupe, Noche Flamenca, at the end of this sold out 110 minute performance, and the show continued on with an encore of improvised dance, music, and song, delighting the Vancouver audience with this dynamic and emotional show.

The program begins with Sophocles' “Antigone,” a short flamenco version of the classic tragedy conceived and choreographed by Soledad Barrio's husband, Artistic Director Martín Santangelo, a New Yorker who, in his pre-show talk, refers to this piece as his vision and prediction of a tyrannical ruler who might rule Europe one day because of the economic situation occurring presently. He also gives an interesting background of how Flamenco evolved as a result of the Inquisition in Spanish medieval times, and how Federico Garcia Lorca in the 1930s popularized it with the Canto Jondo (Deep Song).

The most impressive part of the show is the finale entitled "Soledad", with Soledad Barrio's solo dance. Her deeply tragic and intense facial expressions, her impressive wrist-circling gestures, the slow lifts of her arms and suddenly, the rapid movements of heel-and-toe steps, claps and slaps, impress and delight the audience. With vocalists Manuel Gago and Emilio Florido singing the canto jondo "Me paro en la calle y veo una flamenca en negro, en luto" (I stop on the street looking at a Flamencan in black, in mourning").and accompanied by guitarists Eugenio Iglesias and Salva de María, the music flows rapidly but then stops abruptly, and now all that's heard are the percussive sounds of heels tapping from Barrio and the singers' hand claps..a dramatic pause .then back to the symphonic Flamenco ritual. Truly impressive!

Formed in Madrid in 1993 by artistic director Martín Santangelo and premier dancer Soledad Barrio, Noche Flamenca has captivated audiences and has won many awards, including the National Dance Project (2006 and 2009). The company performs regularly in New York, Europe, Argentina, Chile, Brazil, Egypt and North America.