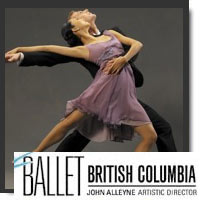 Ballet BC brought home Twyla Tharp’s Nine Sinatra Songs to Vancouver where it was first performed a quarter of a century ago. It’s unlikely that Ms Tharp could have conceived just how much this elegant work would be in vogue in 2008. This is perhaps due in part to the resurgent popularity of ballroom dancing and the encouragement imparted by television shows such as “Dancing with the Stars.”

With gorgeous gowns designed by couturier Oscar de la Renta and sharp tuxedos there is grace and style to match the sophisticated score of Frank Sinatra’s eight celebrated songs (the title is numerically inaccurate, although “My Way” is reprised)

As “Ole Blue Eyes” croons to tunes like “Strangers in the Night” seven pairs of dancers take centre stage in Ms Tharp’s glamorous ballroom showcase below the scattered light of a revolving disco ball. The role here of the male dancer is not to lead as in strict tempo dancing, but to support and “present” their partners.

Ms. Tharp’s movement vocabulary for this music demands elements of glamour and poise from female performers and strength and athleticism from the males. I was especially impressed by the subtle footwork for incidental foxtrot provided by Alexis Fletcher and Peter Smida with “All the Way.” I was less enthused with Melissa Morrissey and Shannon Smith’s flippant interpretation of Sinatra’s only duet in the selection, “Something Stupid.”

I’m split on the virtue of using the Paul Anka composition “My Way” twice to bring the couples together; the first seemed unnecessary and interrupted the natural flow of the work – although, the dancers clearly enjoyed performing as much as the audience enjoyed watching.

The program opened with Schubert, a light and playful ballet choreographed by John Alleyne in classical dance language to Franz Schubert's Trio in E flat, Opus 100. Alleyne uses the composer’s score in three movements to chronicle a ballerina’s career. The first movement, Allegro recounts the beginning of her career, Andante Con Moto deals with the end of her career and the Scherzando is a reflection.

Principal dancer Makaila Wallace, as the central character offers a first-class performance; she is complemented in the first movement by athletic dancer Shannon Smith.