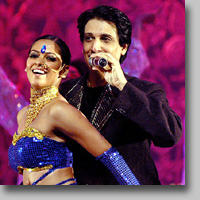 The Shiamak Dance Team gave the noontime packed audience the time of their life. All that energy and all the glitter from the costumes got the audience going. What's more, we got invited to dance with them onstage.

With the use of the screen, thecompany introduced itself. The founder, Shiamak, a dancer and entrepreneur, spoke on screen about his academy and the "do good" themes it pursues. One of the dances was an SPCA call, showing how we should be kind to animals. This surely will get the SPCA wanting to sponsor this group for their effort.

Most of the dances showcased the dynamic fusion of jazz, folk, and modern which is prominently seen in the Bollywood film industry and has been pioneered around the world by Indian choreographer Shiamak Davar.

I particularly like the intro, the first dance where, on one side, the dancers were dressed in glittering costumes with top hats reminiscent of Chorus Line, and on the other side, the dancers were dressed in traditional wear. The music alternated, from modern jazz and hip-hop to the traditional Indian folklore. This was indeed a fusion of jazz and tradition.

The last part was also enjoyable as dancers came to us and made them dance with them onstage. I was one of them. When you get involved, you tend to like the show because you become part of the show.

Shiamak has been successful with his Academy here in Vancouver, and it looks like it's growing in leaps and bounds.