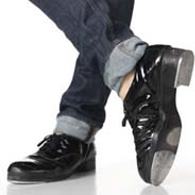 For most of us who recall the consummate artistry of Sammy Davis Jr. and Vera Ellen hoofing across the boards, tap is thought of as a kind of coming together of choreography and basic percussion. Angelino Sarah Reich however, takes the art form to a new level. She succeeds in matching tap to jazz, or more correctly generating jazz through tap. Through her music collaborations with top session musicians like sax player Danny Janklow and pianist Miro Sprague, ninety per cent of the music that Reich and her troupe dance to is scored first-hand.

Tap is the most musical dance form and the only dance form that is considered uniquely American, but may be a distant cousin to Irish stepdance (as performed by Michael Flatley of Riverdance). At its best, it can even be enjoyed over the radio.

Tap Music Project starts with six dancers (4 women, 2 men) stepping on the stage joining a five-piece jazz ensemble already in full swing. As the central figure, Sarah Reich combines precision with emotional veracity. She is surrounded by the other dancers in various forms of white attire holding down the beat.

Unlike many dancers, Reich has no dread of improvisation. In one segment, she indulges in faintly flirtatious improv with Danny Janklow on sax. But arguably the showpiece was the feature dancer in solo performance with Miro Sprague’s jazz inflected interpretation of “Somewhere Over the Raibow.”

Reich takes a democratic approach to her dancers, allowing each of them a chance to shine in solo performance. Anissa Lee displays stamina and strength as well as style, while Melinda Sullivan brings incredible technique. Former Chicago native (now a resident of Los Angeles) Lee How shows moves that are “too cool for school.”